On December 2, Advent Sunday, Ted Dashfield celebrates the 60th anniversary of his ordination as a priest.

Ted, who has spent 58 of his 60 years in the church in the Wairarapa, was born in 1926 in Wanganui, the fourth of five children. “It was quite a good year,” he says. “The Queen, Marilyn Monroe, Phar Lap and President Mugabe were of the same vintage.”

In 1931, at the start of the Depression, the barefoot Sunday-School regular became a pupil at Queens Park School, close to the Sarjeant Art Gallery and what is now the Whanganui Regional Museum. He remembers passing through the entrance archway inscribed with the school motto: Service not self.

Eight years later he entered Wanganui Collegiate, whose then headmaster, F.W. Gilligan, had kept wicket for Essex and was to exert a strong influence over Ted’s life. There he was confirmed in the school chapel and regularly fainted from hunger before the 8am Sunday service.

When World War ll broke out “boys were leaving school and going away and being killed,” says Ted.

“The war, the Holocaust and the atomic bomb were somehow the background of my life.”

After two unsuccessful applications to Australia’s Royal Military College – Duntroon he joined J Force in the 22nd Battalion in 1946. The proud motto of the 22nd, once commanded by Lieutenant Colonel Haddon Donald, was Second to None. His ship arrived in Kure, Japan, base of the miniature submarines that penetrated Sydney Harbour, and the 2000-strong brigade was based in Yamuguchi Prefecture, very close to Hiroshima.

There, “a ‘mad’ padre got under my skin,” says Ted. “I’ll talk about him at the Advent Sunday services. I also remember a little Japanese boy calling out to me, ‘Shoeshine? Shoeshine, soldier?” at about 2am at the Osaka railway station and giving up my hopes and plans to be a soldier. I thought the army was not the best way for me any longer. I’ll be talking about that, too.” (For ten years Ted was part of the army’s army’s Chaplain’s Department.)

He served two terms in Japan, the best part of three years, then came home and applied for ordination. “To my surprise, after quite a wait, I was accepted.”

After two years’ training at College House in Christchurch Ted was ordained deacon in 1951, priested in 1952 and served as curate at St Matthew’s, Masterton, for three years. Kingi Ihaka, later Sir Kingi, was a curate there at the same time.

In Masterton he met Helen Berney, twin daughter of Dr Hugh and Lilian Berney. Strangely, says Ted, Hugh Berney was the doctor who attended the riot by Japanese prisoners of war at the Featherston military camp.

In 1955 they married and immediately sailed to England where Ted was to spend two years as curate in Cannock in the diocese of Lichfield. “They were wonderful people; a vicar, five curates and a Church Army captain.”

At the end of his term he received a letter from the Bishop of Wellington Reginald Owen asking him to become vicar of Tinui. “The bishop said it’s the only vacancy, and please let me know by return post!” He did so. 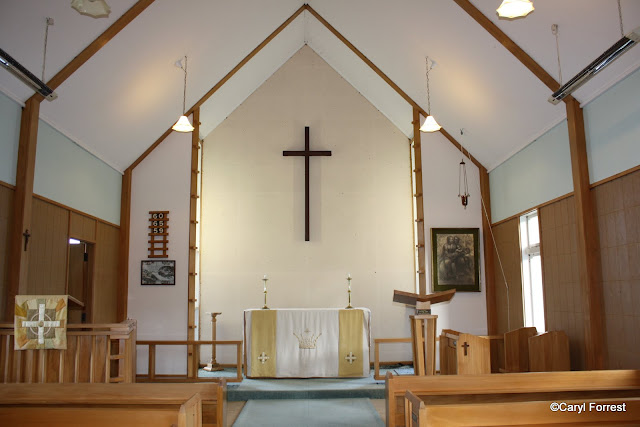 The lovely light interior of St John the Evangelist, Homewood

In Tinui from 1957 to 1964, he was involved with the establishment of St John’s, Homewood and, with great help from Castlepoint residents Jack and Erica Broad, he helped prepare the ground for St Peter’s by the Sea. They obtained land from the government of Sir Keith Holyoake, Ted chose the name St Peter’s by the Sea and things were underway when he left Tinui to become vicar of Carterton.

The Dashfield family, taken while Ted was Vicar of Carterton.
Left to right: Helen, James (standing), Ted, with Philip and Prue sitting in front.

Then, “out of the blue”, he was appointed headmaster of St Matthew’s Collegiate School, serving there from 1969 – 1980 and starting a fashion for male principals in girls’ schools.

School chaplaincies at Nga Tawa and Huntly followed; then two terms as interregnum headmaster of St George’s School Wanganui in 1982.

Pressed then by Bishop Eddie Norman, “the soldier bishop”, to become priest in charge of Tinui, Ted felt he had been there, done that and politely declined. The bishop politely insisted, and Ted said “I’ll do it for six months which will give you time to find somebody else.” The six months became almost six years! Home for the duration was their Riversdale bach.

Join us at St Matthew’s Church for 8am Eucharist and/or 7pm Choral Evensong, Advent Sunday, December 2. All are very welcome.