Skip to content
HomePosts tagged 'St Andrew’s in the Paddock' 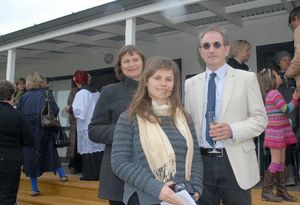 Masterton woman Pat Chapman’s life work was remembered at the weekend when parishioners of St Andrew’s in the Paddock unveiled a memorial centre in her name.

The Pat Chapman Memorial Centre was officially opened next to the Upper Plain Rd church on Sunday after the weekly service.

A ceremony was held and speeches were given before the building was blessed and churchgoers shared a morning tea.

Vic Potter said it was an honour to have the building named after his late aunt, who had spent her entire life helping others.

Mrs Chapman was “always involved in the local community” and was long associated with Plunket and Meals on Wheels.

She also cleaned the church throughout the 1970s and’80s when it was used for its monthly service.

“She was an amazing woman,” Mr Potter said.

“We were given some astonishing gifts, which was really wonderful, and a very handsome grant from the Wairarapa Families Anglican Trust.” She said the centre would be primarily used as a space for children to study.

We give thanks for two grants from the Wairarapa Family Trust (formerly Sedgley Trust):